Simply put, Portland is beer heaven. Tons of breweries, great bars and bottle shops, local and inventive food, and mountains, hiking, parks, and hot springs. If you head west, use this as a guide to squeeze every last drop of beer from the city.

I went straight from the airport to Apex, an amazing bar with 50 taps. I was lucky to have two world-class beers. First was Russian River Pliny The Elder, a DIPA. It’s a top five beer ever for me (and the third best beer in the world according to Beer Advocate), and while I’ve had it bottled, this fresh draft was a totally new experience. The hoppy pine and grapefruit is perfectly balanced. Sweet, juicy, tart and bitter all at the same time. Pretty much a perfect DIPA. I then had a Hair Of The Dog Adam, an old ale. It’s dark and thick, with a leathery (!), smoky, dark fruit taste. Amazing (I’ll talk more about HotD later). With the Pliny at 8% and the Adam at 10%, added to my jet lag, added to my lack of eating dinner, I barely remember going to the food carts and eating something called meatball fries. But I assume they were delicious.

The next morning started with a great hangover cure, the best bacon, egg and cheese sandwich I’ve ever had, at Bunk Sandwiches. Then it was off to the breweries! Since there are so many in the area, I recommend taking one day for the Hood River breweries, and one day for the Portland breweries. I’ll mention them all, but spend the most time on my three favorites, Logson, Hair of the Dog, and Cascade.

Hood River:
Hood River is about an hour drive east from Portland, and has some fantastic scenery since it’s near Mt. Hood, Mt. Rainer, and Mt. St. Helens. Most of the five breweries I went to had amazing views of at least one of these mountains.

Logsdon Farmhouse Ales – the best in this area, and a can’t miss spot. The brewery is located in a tiny farmhouse on some incredibly scenic farmland. It reminded me a lot of Hill Farmstead in terms of size, location, and overall amazingness. There we met Seaberg, the Icelandic artist who painted all their labels, who was working the tasting room that day. You get four 3oz tastings for $5. It rotates, but we had Kili Wit, Seizon, Seizon Bretta, Far West Vlaming, and Abberant. The two saisons and the Vlaming were definitely my favorite ones, with the Seizon Bretta the best. It’s bottle conditioned with pear juice (pears are big in Oregon apparently), and is incredibly tart, dry, and frothy. Just a perfect combination of funky, fruity, sour and tart. 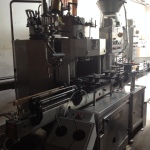 The rest of the breweries up here are similarly tiny, and mostly new. Solera Brewery offers great views of Mt. Hood and six of their beers on tap. I really enjoyed The Berliner and Chubby Bunny. Next was Pfreim Family Brewers. Here I got a Fresh Hop Mosaic Belgian Wheat. This is a good time to talk about fresh hops. Oregon and Washington grow about 93% of all the hops in the country. Fresh hop season is in the fall, and I unknowingly stumbled right into it. From late August to early September is the Northwest hop harvest, and in late September most breweries debut their “Fresh Hop” beers, which are different every year. As a hop-addict, I tried many and all were amazing. You could really taste the freshness, as they were much more grassy (in a good way) than what I’m used to. You can really taste the essence of the hop. I continued my Fresh Hop craze at Everybodys Brewing, Walking Man Brewing, and Backwoods Brewing.

Portland:
The next day was four Portland breweries. The city is super confusing to get around in. It seems like there are 10 rivers and 20 bridges. Luckily, cabs are easy to get, and the light rail system isn’t THAT confusing. Just keep in mind it’s probably going to rain. And for some reason, no one uses umbrellas, or even wears any sort of waterproof jacket. It’s a hoodie or nothing here.

The first stop was Deschutes Brewery for lunch and a Fresh Squeezed IPA. It was malty for an IPA, but had a great juicy mouth feel. At Upright Brewing I had another fresh hop beer with The Hop And Abstract Truth, which was my favorite fresh hop beer of the trip.

Next was Hair Of The Dog, and now we got into some serious beer. Since I had an Adam at Apex, I went for Fred, and it was pretty unbelievable. It’s an American strong ale, brewed with rye and Belgian candy sugar. The beer is dark and thick with tastes of malt, hop, and amazing burnt sugar. A crème brulee without the sweetness. I also got a small sample of the very rare Cherry Adam From The Wood. They age Adam in bourbon and sherry casks, with local cherries, for 15 months. It has strong and sticky cherry, raisin and chocolate flavors.

Hair of the Dog

Hair of the Dog

Cascade Brewing was the last brewery of my trip, and one of the best. They specialize in sours, and everything seemed to have some fruit in it. I had three wild ales: Elderberry (cask), Cherry Vlad, and Honey Ginger Lime. All were great, but the last two extremely great, and only brewed once ever. I felt extremely lucky to have them.

After five breweries and many beers, it’s a great idea to eat donuts! So get on line at Voodoo Doughnuts. You have to get the famous bacon maple bar. And since you’re there, why not get another? My choice was the Old Dirty Bastard, an Oreo/peanut butter chocolate heart attack in donut form. It was then time to slip into a sugar/beer coma and go to sleep.

As you’re making your way through this amazing beer trip, you need to buy bottles (sold at all the breweries), especially since almost none of these are ever available in NYC (with the exception of Hair of the Dog, very very rarely). So, I came back to NYC with quite the beer haul. Here’s a tip: it’s 100% legal to put beer in your checked luggage. I bought some cardboard boxes and bubble wrap, and packaged my bottles up. It was well worth paying the extra checked
bag fee, and nothing was damaged.

Overall, Logsdon, Hair of the Dog, and Cascade were by far the best breweries here, and it’s worth a trip to Portland just for those. Pretty much every bar/grocery store here (even the bars at the airport and random corner stores) fill growlers, and everywhere we went had more than one amazing beer to try. Beer heaven.

5 thoughts on “Trip To Portland, OR”