Eric:  Last night I was lucky enough to have some really rare and incredible Hair of the Dog beers.  But first, some other stuff I’ve had recently:

Friday night was IPA night (with a sour break)-

Saturday had another great beer lineup-

Sunday was a mini beer day- 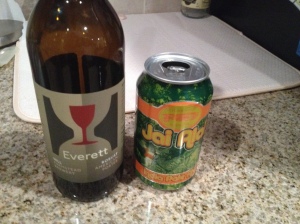 After all this, I somehow went out to a bar on Monday-

I met Chad (to protect his identity, let’s call him Chandra) at Pony Bar in Hell’s Kitchen.  I had a Double Dose DIPA, and a Boulder Beer FRYEd Fresh Hop Rye Ale.  I didn’t expect much, because Boulder Beer generally isn’t very good, but this was really great, and reminded me of all the fresh-hopped stuff I had in Portland.  It tasted like fresh cut grass, which makes sense since it’s made from fresh cut hops.  I really like the bar.  They have only American craft beer, all for $6, and a really cool beer menu/board. 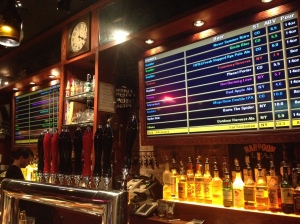 Another cool thing is when a keg runs out, they replace it with something new.  They also have pretty good food. I got turkey chili and fried horseradish pickles.  After my mouth stopped being on fire, I took this picture of Chandra’s glass of Double Dose, showing some pretty sweet lacing. 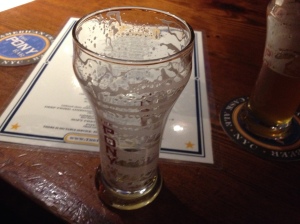 Then things got epic again.  Chandra had a special surprise, bottles of Hair of the Dog Otto and Matt.  They were both pretty unbelievable.  The Matt (along with the Hill Farmstead Everett) was the best dark beer I’ve ever had, and one of the best beers of any kind I’ve ever had.  It’s made from malts, smoked malts, and Belgian sugar, then aged in bourbon and apple eau de vie (apple brandy) barrels for 12 months.  It was so complex I still don’t know what was going on, and we took our time with it, drinking it for about 30 minutes.  Otto was sweeter and fruitier, almost like a port, and thick and syrupy.  They take their basic Fred and add peaches and cherries, then age it in oak barrels for 18 months.  With alcohol contents of 11.5% for Matt, and 13% for Otto, added to the sweetness and thickness of both, these are perfect beers to share with a fellow BrewBoyz or two.

On the walk back from the subway in DUMBO, I saw this street art which is just another thing that makes living in NYC great… 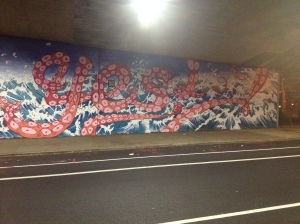