I had my very first BC Cherry Rye, and it was totally great.  The rye really changed the flavor from the standard bourbon barrel aging, and helped cut down on the cherry.  The cherry was definitely still there, as well as vanilla and chocolate, but not overpowering.  A bing cherry covered with dark chocolate in a glass.  At 13.7% it’s best to take your time with this, but I didn’t.  Oops.

Next was my very first Lolita.  It’s a wild ale aged in French oak Cabernet Sauvignon barrels with raspberries.  It was tart and refreshing, especially after the cherry rye.  It was nice and bubbly, like a wine spritzer, Andrew’s favorite drink.

I moved on to a Sofie Paradisi, which I’ve had before but is very hard to find on tap.  This takes their standard (and very good) Sofie saison (aged with cirtus peel), and adds grapefruit during the aging process.  It looks like champagne, and has sticky white head and fun lacing.  Overall, fizzy and fruity! 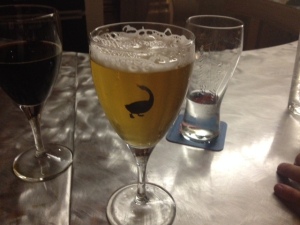 Finally, had my first Bruery Oude Tart.  They call it a Flander’s Red Ale. I don’t know what that is.  Do you? I didn’t think so.  Anyway, it’s one of the sourest beers I’ve had, although not as much as their Tart of Darkness that we had at Luksus.  Still, if you don’t like sour beers (like how I used to be), then… run! 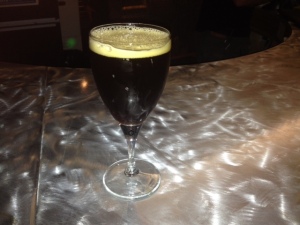 I was also lucky enough to purchase bottles of Halia, Gillian, and Lolita. I plan on aging them in my fancy beer closet.

Overall, this was a great night.  Top Hops is a great bottle shop/tap room.  It’s located downtown on Orchard between Delancey and Broome. Dangerously, only two stops on the F from me.  They always have special events/takeovers like this, and even offer beer classes, which I really want to go to. Although, I’m pretty much a beer genius already.  Here is their website, facebook, and twitter.  Go visit them!

On the walk back from the subway in DUMBO, I saw this street art which is just another thing that makes living in NYC great…(I’m going to run out of street art in DUMBO soon). 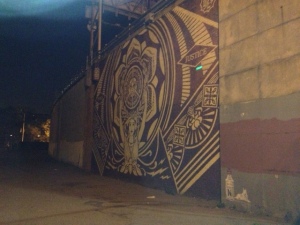