Eric: The first time I saw Billy Durney was weeks after Hurricane Sandy. He was standing next to a meat smoker on a sidewalk in front of his still-under- construction restaurant on Van Brunt Street in Red Hook.  As I drove past him in my car, the aroma of juicy beef penetrated my car and my soul, and I almost turned around to ask for a handout.  It turns out Billy was smoking meat to be donated to churches, community groups, and volunteers from Red Hook to the Rockaways. This is the essence of the man, his food, and his restaurant. You’ll see him greeting every single table, every single night at his counter-service Hometown BBQ in Red Hook, Brooklyn. 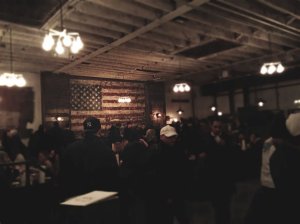 You’d never know it after tasting his BBQ, but Billy grew up not in the Hill Country of Texas, but in Flatbush, Brooklyn. His influences come from his childhood there and his travels to BBQ meccas in Kansas City, the Carolinas, and Texas. Especially Texas. His mentor is Wayne Mueller, from the world famous Louie Mueller’s BBQ (founded in 1949) in Taylor, Texas. This shocked my friend, a native Texan visiting NYC, who I brought to Hometown as my BBQ ringer. He grew up on a cattle ranch, and has a father in the BBQ catering business, so when he says the beef rib here is the best he’s ever had, it means something.

Billy claims the beef rib is his soul on a plate, and I claim it’s the best in NYC. Sourced in Nebraska, it’s smoked for six hours, and is incredibly moist, smoky, crispy on the outside… just perfect ($22/lb). And huge. Our one rib weighed in at 1.02 lbs. The other must-haves are brisket ($25/lb) and jerk chicken ($13/half chicken). The brisket is smoked using oak. Like all really good Texas brisket, it’s served without sauce, and doesn’t need any. But for some extra dimension, put on some sweet and tangy sticky sauce, or vinegary hog sauce. Chicken is usually overlooked in BBQ, but this chicken was incredibly juicy, flavorful, and not overly smoky from the subtle cherry wood. Everything here just melts in your mouth.

The best side dishes are cornbread ($3/slice), mac & cheese, Collard Greens (made with house cured bacon) and Backyard Potato Salad (all $4/6/8 for s/m/l). Steve’s Authentic Key Lime Pie, made just down the street, is a must for dessert, if you have room for it.

Local beer including Sixpoint, Blue Point, and Other Half are on tap, and there are 70 whiskeys to choose from.  The seat-yourself system somehow works. I didn’t see anyone waiting for a table. The décor is straight Texas, from the antique signs, American flag mural, and Waylon Jennings and Willie Nelson playing from the jukebox.

Red Hook isn’t the easiest place to get to, but Hometown is worth the trip, and repeated trips.