I almost didn’t want to pick this beer because I wanted to be more “original” with my choice, but it’s the beer that gave me the idea to do this post in the first place. I was drinking a can of this super hopped-up Imperial IPA on Valentine’s Day evening and said to my wife: “I could drink this beer forever and never get tired of it!”

There’s really nothing like a fresh can of Heady Topper. It’s one of the few incredibly hyped beers in the world that actually lives up to its reputation as being one of the best. When you crack the can, the hop aroma shoots out at you like you just took a machete and started hacking away at a grapefruit. It’s dangerously easy to drink—I often call it “Beer Gatorade,” because of its delicious citrus flavors and ease of drinking. It’s got a lot of bitterness from the hops, but not overwhelming. It’s appearance even looks like grapefruit juice: hazy orange, but with a big fluffy white head. I hope to someday fulfill my destiny of living on a desert island with as much fresh Heady Topper as I want!

Pliny on tap in Portland

Bud Light. Bud Light Lime. Bud Light Platinum. Bud Light Lime-a-rita/Straw-ber-rita (yes these exist). How can any beer snob choose just one of these delightful beers to drink all day, every day? After much careful thought, my desert island beer is….Pliny the Elder.

I’ve only had Pliny on tap once in my life, on a magical night in Portland, OR. I’ve also only had a few bottles of it, since it’s impossible to find in NYC. But I choose it because each sip is a pure beer-gasm. Pliny is a Double/Imperial IPA hop-bomb, with tons of Amarillo, Centennial, CTZ, and Simcoe hops. Like Heady Topper, it lives up to the hype. Grapefruit, orange and lemon flavors are in perfect balance, and the hoppiness is smoothed out by a malty backbone. Complex but easy to drink, and the bold flavors mask the alcohol (which is there… it’s 8.00% ABV).

Refreshing, juicy, and drinkable. All day, every day, forever! 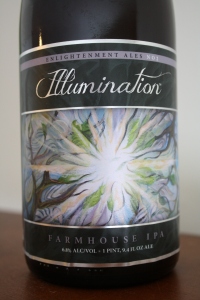 If we’re talking about a bottled beer offered year-round, this would be my pick.  The goalposts are always moving in the beer world; the scene is always in flux.  Prime example:  The head brewer at Englightenment, Ben Howe, recently announced a merger with Idle Hands Brewery.  Although he’s going to join their staff as Head Brewer, who knows what this will mean for the lineups of both breweries.  If they change the recipe, I’ll always have the memories.  But right now, at this moment on planet Earth, this is the one.

Illumination is a masterful confluence of my all-time favorite styles.  As a hoppy Belgian farmhouse saison, it checks off everything I’d want in an everyday drinker: citrusy, complex, tight carbonation, a balanced bitter/sweetness ratio, dry finish, and a wee sense of funk.  At 6.8%, I’d be able to slay two or three, maybe four 750ml bottles before I pass out, sunburned, on the beach.