Here in New York City, we’re not so familiar with Prairie Artisan Ales (Tulsa, Oklahoma). I made sure to head to Torst for the release party of their collaboration beer with Evil Twin called Bible Belt, and luckily they had lots of other Prairie stuff on tap.

Since Bible Belt is a combination of Prairie’s Bomb! and Evil Twin’s Even More Jesus, I decided to start with a Bomb! for a taste by itself. This is a huge beer…an Imperial Stout (learn more here) coming in at 14%. You can clearly taste everything it’s brewed with: coffee, cacao nibs, vanilla beans, and ancho chili peppers. The best aspect of this beer is the chili. I’m not a spicy food (or beer) fan, but it was perfectly subtle, leaving a slight burn on the roof of your mouth after each sip. A great complement to the decadence of the coffee, chocolate and vanilla. This would be a fantastic beer to pair with ice cream or dessert. 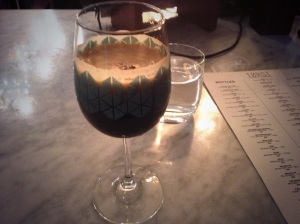 I’d already had Even More Jesus (another imperial stout at 12% with toasty, dark fruit flavors), so now let’s try the combination… Bible Belt. This beer features the best aspects of its components. Dark, and silky, with all the greatness I talked about before. Chocolate, malt, coffee, chili, dark fruit, fudge brownies, coffee ice cream…all VERY intense and very delicious. It’s 13%, but you’d never know it. One of my new favorite stouts.

After the stout craziness, it was time for Prairie Ale, a light saison. Well, maybe not SO light (8.2%). A nice overall dryness, with bread, dried fruit, and some pepper flavors. I really enjoyed the frothy head that maintained its bubbliness throughout. It was truly great, and I could drink it forever, but this night was about the stouts.

These beers are not easy to find, but you need to try them. Totally world-class stouts! 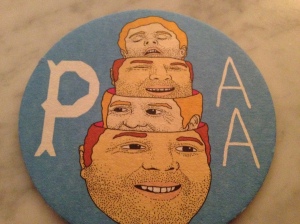