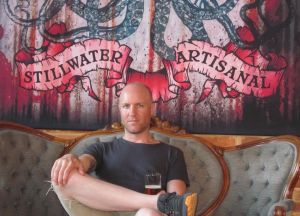 Brewer/founder Brian Stillwater’s brewery Stillwater Artisanal Ales, a Ratebeer top 100 brewery in the world 4 years in a row, combines beer, art, and music into one exciting brand. I got a chance to speak with Brian about his beer, his plans, and his gypsy brewer life.

Where’s The Beer NY: What’s your general inspiration when brewing?

WTBNY: As a gypsy brewer, you must travel to some awesome breweries. What are some of your favorites to work with?

BS: I have a great relationship with DOG Brewing in Maryland, Two Roads in Connectict, and Westbrook in South Carolina. I think the relationship with the other brewers and how we work together is more important than the brewery itself.

WTBNY: You were just in Brazil. What was that trip like?

BS: Outstanding! I did four collaborations utilizing various Amazonian ingredients like jungle fruits, and unique Brazilian woods for aging. The scene there is young and energetic, so it was good to work with brewers with fresh perspectives and a willingness to experiment.

WTBNY: You make a lot of saisons. Why are they your favorite?

BS: Because it’s not a style.. Farmhouse brewing is a philosophy of brewing with what is available and however possible. I like to think I just make Stillwater beers.

WTBNY: Stillwater comes in both bottles and cans. What’s the decision making process when choosing one over the other for specific beers?

BS: The concept of the beer. For example, Classique is a deconstruction of the post-prohibition American light lager. Cans seemed like an obvious decision. I want the beers in cans to be the most accessible beers in the portfolio…the everyday beers.

WTBNY: You make some beers in a ‘series,’ such as the Folklore series (Folklore, Bourbon Barrel Aged, Coffee, Red Wine Barrel Aged, The Tale of Van Winkle). Can you explain the process of first coming up with the standard beer, then branching out four more derivatives?

BS: That’s the barrel aged series. I just Like to experiment with various aging when I come across nice cooperage. I also like to play around with additions a bit; its fun and people like trying new twists to old favorites.

BS: I’m always looking for the best and freshest barrels I can find.

WTBNY: What about the ingredients? Are you into local/sustainable/green sourcing?

BS: Stillwater’s motto is ‘brewed locally somewhere’. I enjoy using indigenous ingredients as much as possible, but most importantly I want the best and freshest ingredients available. I think the gypsy brewer model is extremely sustainable, and I actually have plans to make it more so.

WTBNY: You live part time in New York City. What are some of your favorite bars to drink Stillwater here?

BS: Proletariat, Torst, most of the Momufuku establishments. There are so many good places here.

WTBNY: Anything exciting coming up? Can we look for anything new in New York City?

BS: This year is going to be crazy. I’m headed to Tokyo to brew with Hitachino, then off to Europe and then down to Australia. I’m not sure which beers will make it back to the States, but we have loads of cool new projects coming up stateside like a barrel aged series, and the new Remix Project. Those will all find their way to NYC.