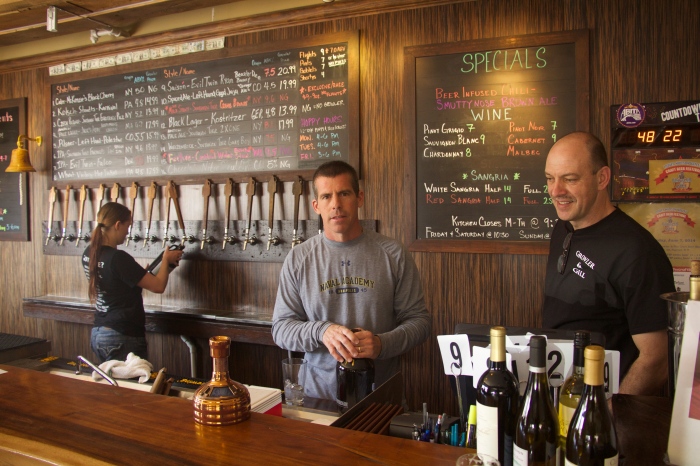 Mike and Walter (left to right) of Growler & Gill

If Growler & Gill was around when Eric and I lived in our hometown, Rockland County, New York, we would have been drinking like kings (see Eric’s Beervolution post). But whenever we’re back in town to visit our parents, we always make time to stop by what we believe is the best craft beer tasting room and bottle shop in the region.

Owner Mike Fitzgerald, along with his brother Joe and friends Walter Mihatov and Brian Condon, opened Growler & Gill Craft Beer Shoppe in October 2012. Fitzgerald is still a biology teacher at a nearby high school and knows the winning formula for a successful craft beer spot.

“I love craft beer and had trouble finding good beer in my town,” says Fitzgerald, “so we decided to open a place where someone can drink great beer in a comfortable, cool environment.”

The store is the first of its kind in Rockland County to combine a tasting room, to-go growlers and bottles, and delicious food. “People come in and realize that we are about the experience of drinking a great beer and pairing it with delicious food,” says Fitzgerald. “It’s about quality not quantity.” 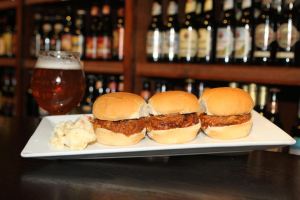 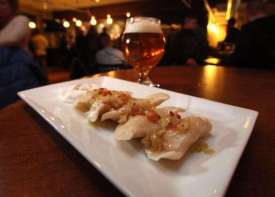 And, of course, there’s a ton of quality beer. If you’re like me (a beer nerd) and from New York City, you should make the quick 30-minute ride to the ‘burbs, because you can get beer at Growler & Gill that you won’t find in any shop in the city. Our favorite is Massachusetts’s Jack’s Abby, which only distributes to upstate New York. Each time I visit Rockland, I pick up some of the brewery’s hoppy lagers like the Double Indian Pale Lager Mass Rising or Kiwi Rising and the IPL Hoponius Union.

Fitzgerald says hop bombs like these are the most popular offerings at the shop. He explains that when the store opened almost two year ago, his clientele were mostly looking for easy-drinking wheat beers. But as his customers began discovering new beers from the store’s selection of 750 bottles and 16 draft lines, he says their tastes changed, and like so many Americans, Growler & Gill’s patrons have caught the craft beer bug.

That led Growler & Gill to start the first beer festival in the region—The Lower Hudson Valley Craft Beer Festival—to help spread their love of craft beer. The 2nd spring festival is being held on June 7, featuring over 50 craft breweries, live music, and BBQ from Bailey’s Smokehouse. The store also features brewery tastings every Thursday, trivia on Wednesdays, and open mic nights on Tuesdays. 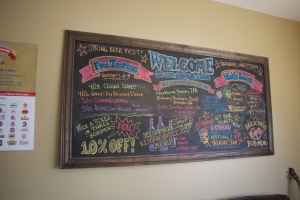 Check the board for events and specials

Fitzgerald and his partners are proud of the craft beer community they’ve created in Rockland. “Some of my customers have become good friends,” he says. “It’s also nice to see so many young families come in. We really have a wide range of people who frequent our place.”

But don’t think Fitzgerald has forgotten his roots as a biology teacher. “My wife and I traveled to Belgium last summer and were able to tour some of the breweries that make some of the best beer in the world,” he says. “I get to drink lots of awesome beer and call it ‘research.’” What’s better than that?