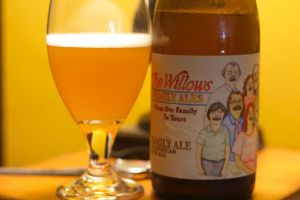 The first beer released by Heath Glover’s The Willows Family Ales, Family Ale, is one of the best new sours we’ve had. If you read our blog, you know we are crazy about the beer coming out of Tulsa, Oklahoma, specifically by Prairie Artisan Ales. Heath started out as a home brewer, then worked at Prairie, where he was offered a chance to start his own brewery using their equipment. The result is Family Ale, a lacto-sour bottled with Brett Lambicus.

Family Ale pours a hazy orange, with a tart, funky, lemony aroma. The taste follows the nose, and adds the sourness and a slight funk. It’s an extremely refreshing sour, and easily accessible for those new to sour beer. In fact, accessibility was Heath’s goal with this first beer. Expect the sourness level to increase with his upcoming Tarty and Rose, brewed with rose hips.

For more on Willow, check out our interview with Heath here.

For more on Prairie, we’ve reviewed Puncheon and Birra, and went to a fun release party for Bible Belt.

One thought on “The Willows Family Ales – Family Ale”