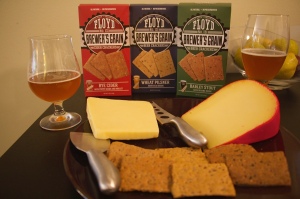 One of our favorite things about beer is how it can replace and surpass wine in food pairings. A stout with chocolate, a saison with dinner, an IPA with spicy food… the list goes on and on. Beer is also extremely versatile when paired with cheese and crackers. Floyd Eats has released Brewer’s Grain Beer Crackers, made with the same grains used to create beer: barely, wheat, rye flour, seeds, and hops. To further entice the beer lover, all three cracker varieties are made with actual beer. The company, founded by the owner of the iconic Brooklyn Heights bar Floyd’s, has a great track record with their famous Kentucky Beer Cheese (found in locations throughout NYC and Texas).

We sampled Barley Stout, Wheat Pilsner, and Rye Cider crackers with Dutch Gouda, 2 Year Aged New Zealand White Cheddar, and some great beer. The crackers taste great both alone and with cheese, and serve as a quick bite or a more substantial snack if topped with cheese, dried meat, vegetables, or spreads.

You can find the crackers at smaller specialty shops around the city, especially those with high end craft beer and cheese, like Court Street Grocers, Malt & Mold, Foragers City Grocer, and Gourmet Guild. They cost about $5.99/box and are definitely worth a try!