One of the biggest releases of the year is almost here: Goose Island’s 2014 Bourbon County Brand Stout line-up! Check out this year’s descriptions below. You won’t be able to get Proprietor’s in NYC (only Chicago), but we’ve listed it for you just to make you drool even more (sorry)! The big highlight is obviously the return of vanilla to the Bourbon County line-up, but this time aged in Rye Whiskey barrels. I was lucky enough to try a taste of the 2010 Vanilla at Top Hop’s Migration Week event a few months ago, and I’m very excited to see what this new variation has to offer. We’ll follow up this post with reviews soon!

We’ll be at One Mile House (10 Delancey Street) on Wednesday, November 26, where they’ll have almost a dozen Goose Island taps, including several 2014 Bourbon County stouts and some of the Goose Island wild ales. Click here for the details.

After you’ve stuffed yourself with turkey (and more beer, of course) on Thanksgiving, come on out early the next day, Friday, November 28, to Top Hops‘ (94 Orchard Street) Black Friday event. There will be doughnuts and coffee for people waiting in line starting at 7 a.m., along with some special Bourbon County gifts for those who show up earliest. Click here for details (more coming soon). 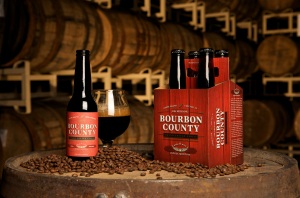