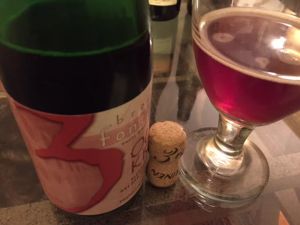 Ah, spontaneous fermentation. The trademark of Brussels-area breweries like Cantillon and Drie Fonteinen. Drie Fonteinen produces their own wort (about 70% of their total production) and buys the rest from different breweries in Belgium. After the wort is cooled in a…coolship, it’s left exposed to the air, allowing it to be inoculated by naturally occurring yeast and bacteria (found only in this area of Belgium). The beer is then barrel-aged (oak, sherry, or port). The result is pure lambic.

Drie Fonteinen then blends different lambics together and ages them more to produce their beer. For Oude Kriek, the blend is aged 6-8 months in oak barrels with sour cherries. Once bottled, it’s aged for about 4 months more, for a secondary fermentation in the bottle. During all this aging and fermenting, the sugar in the fruit actually disappears, leaving the cherry taste without the sweetness.

This is a truly great beer, pouring red with a pink head. Strong cherry tastes balanced by a sour backbone with a bit of funk. Time for a trip to Belgium to have some more!