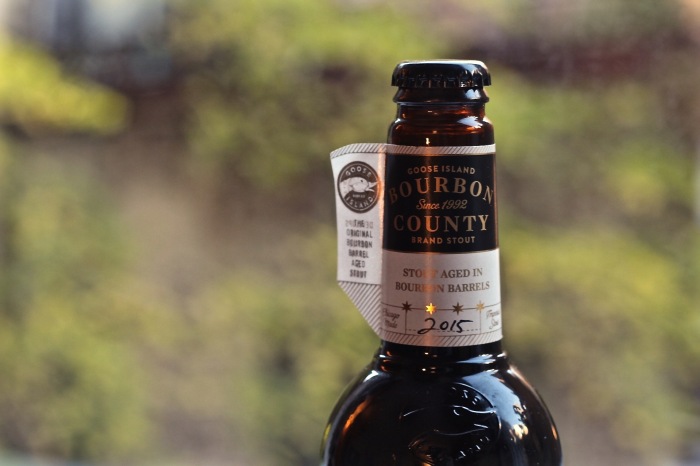 The holidays kick off on Black Friday, and craft beer lovers will be lining up around the country for one of the best beers on the planet: Goose Island’s Bourbon County Brand Stout!

We’ll be at One Mile House (10 Delancey Street) on Wednesday, November 25, where they’ll have almost a dozen Goose Island taps, including several 2015 Bourbon County stouts (yes, RARE!) and many other limited beers from Goose Island. Click here for the details.

After you’re stuffed with turkey and fixings, come out early the next day, Friday, November 27, to Top Hops (94 Orchard Street) for their Black Friday event. Click here for details. (And, yes, RARE! to the first 200 in line.)

Now on to the reviews!

If you’ve had BCBS before, you know it never disappoints. The bottles might look a lot different this year, but they’ve got the same great beer inside and we think this lineup is probably the best yet. 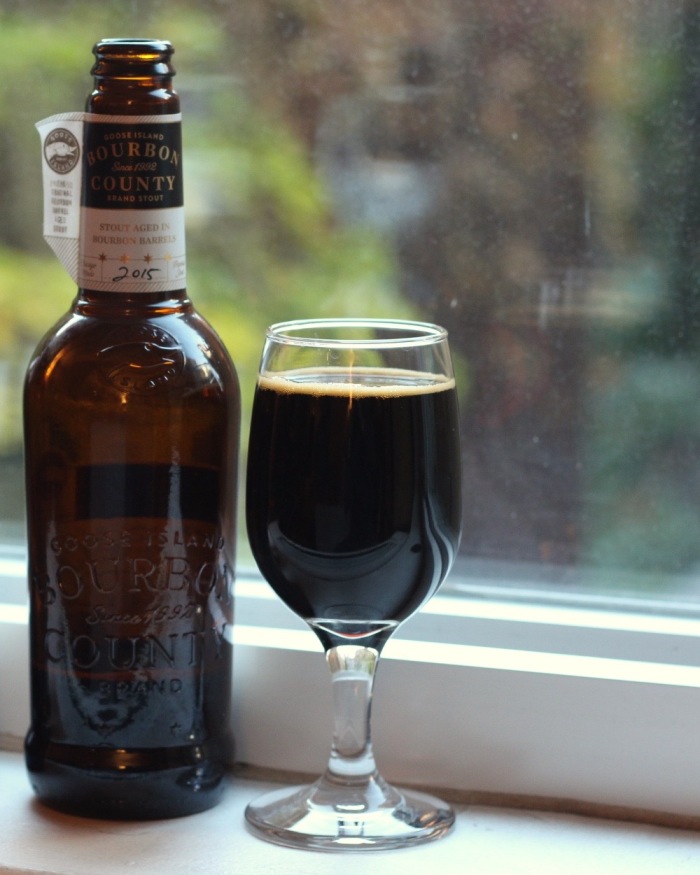 This pitch-black brew looks amazing—it’s completely black and viscous. The taste is a perfect balance of bourbon, oak, coffee, caramel, and chocolate. What I love the most about this beer each year are the decadent  vanilla, toffee, and roasted marshmallow flavors.

The biggest surprise for us was that the new release drinks so smoothly compared to past vintages at release. BCBS always ages great and its heat mellows out over time, but this year tastes as if it has already had time to mellow out in the bottle. It’s creamy, smooth, and just super delicious. You won’t be able to stop sipping. 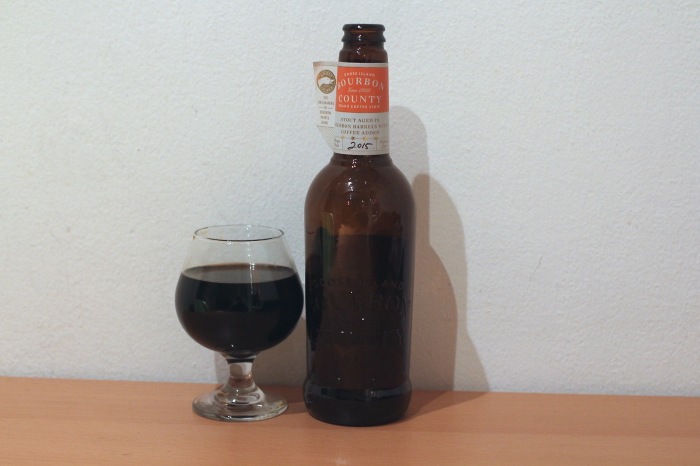 I’m just going to say it right away: 2015 is our favorite coffee variant yet. It’s made with Intelligentsia’s Los Delirios coffee from Nicaragua that imparts both rich roasted coffee flavors along with the subtle nuttiness that a good coffee should have. The smell is like someone poured a mug of coffee right into the beer and the taste follows. Unlike some other variants, we suggest drinking this fresh. Don’t wait to drink this beer—it tastes amazing right now! 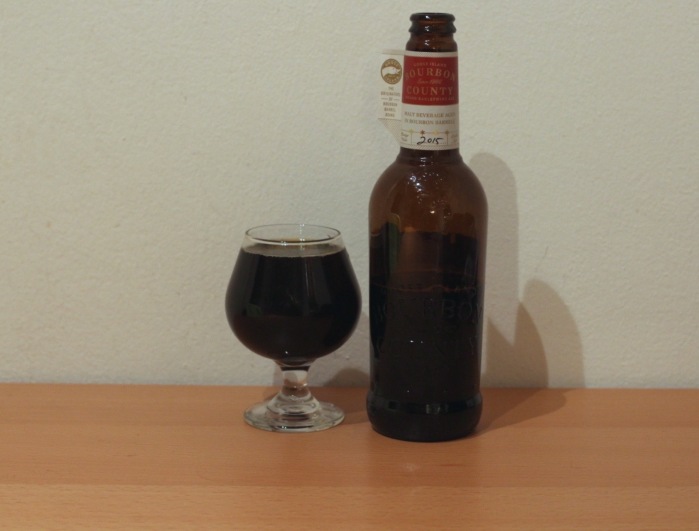 We are huge fans of Bourbon County Barleywine and unlike the coffee variant, we think it ages amazingly. Bourbon County’s take on the style is unlike any barleywine you’ll find. That’s because it’s not just any barleywine—it’s a traditional English-style barleywine aged in barrels that once housed BCBS. So when you drink it—especially back-to-back with BCBS (which is what we did—for science!)—you’ll get those BCBS flavor notes of chocolate and roasty malt, but along with the beautiful caramel, tobacco, and vanilla of the beer. And we know we’re sounding repetitious, but this was our favorite vintage since it was released. 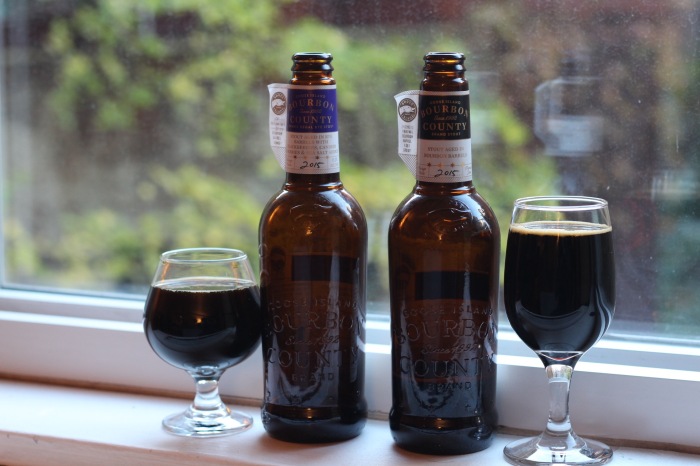 This year’s rye whiskey barrel variant was aged with blackberries, Luxardo candied cherries, fresh sour cherries, and sea salt. This beer was the biggest surprise of the lineup for us. We thought it would be similar to 2013’s Bourbon County Backyard Rye variant, but we were wrong.

We love both beers, but the Backyard is much more berry heavy and  sweeter than the Regal Rye. This year’s beer has subtle berry flavors that build as you drink it. You can really taste the blackberries and cherries individually but they balance well with the stout flavors. The salt just helps to bring out those subtleties. 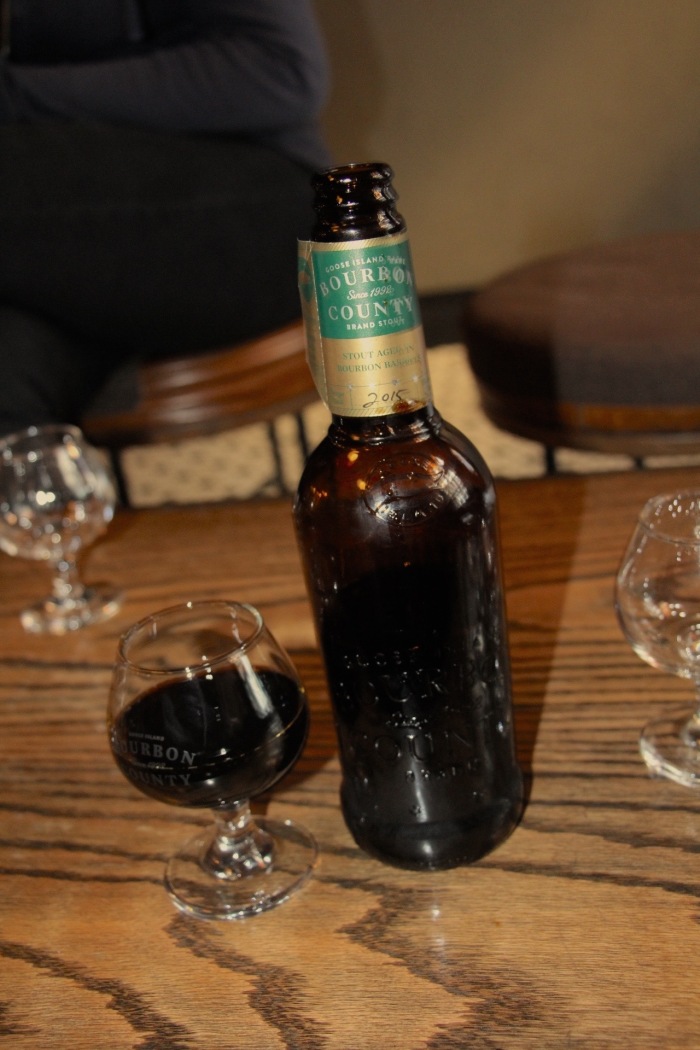 We had the chance to sit down with the Goose Island’s Brewmaster, Jared Janoski, a few weeks ago at Ward III in Tribeca, where we got to try Rare Bourbon County Brand Stout. He told us how the brewery was fortunate enough to find 35-year-old Heaven Hill barrels. These oak barrels began aging Bourbon in 1979, but were forgotten about until a few years ago. The barrels were found and sent to Goose Island to do … something. Janoski decided to resurrect Rare—only bottled one other time in 2010 (but aged in Pappy Van Winkle barrels).

Usually Bourbon isn’t aged for more the 23 years, but the extra time in these ancient barrels imparted a very unique flavor. BCBS (already aged for a year in Bourbon barrels) was then aged for two more years in the ancient barrels before bottling.

We got to drink Rare back-to-back with BCBS and the difference between the two beers is astounding. This might sound cliché, but Rare is like BCBS on steroids: the bourbon in the nose and taste is much bigger and the more subtle flavors are magnified too. There are huge vanilla and caramel flavors, and a lot more tobacco and rich dark fruit flavors. 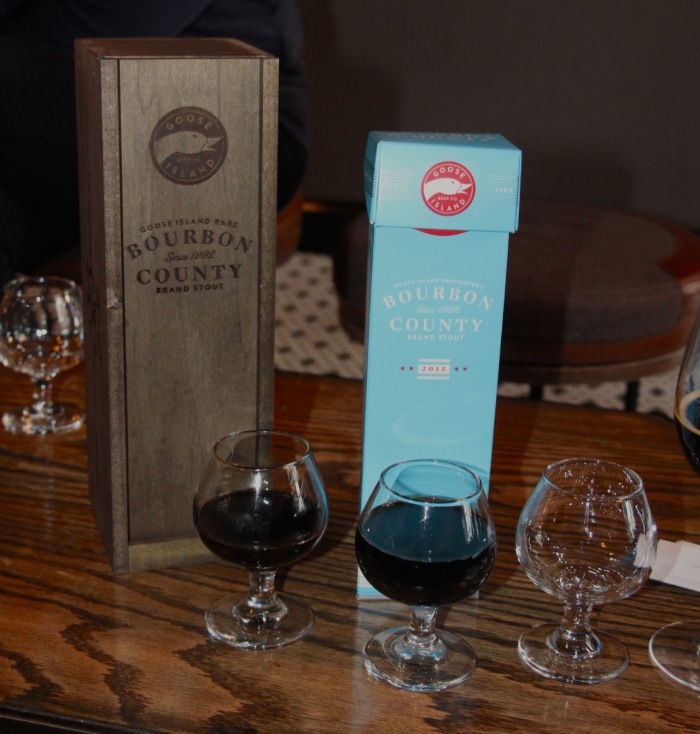 Rare and Prop at Ward III

Janoski wasn’t the only Goose Island brewer in attendance at Ward III. We also got to meet with Diana “Di” Rodriguez. She is a new brewer at Goose Island, who recently only started as an intern in September 2014. Rodriguez told us that soon after she started, all the brewers—including the interns—were given a four-pack of 2014 BCBS to take home to create their own recipe for the 2015 Proprietor’s Bourbon County Brand Stout.

She walked around her Chicago neighborhood, picking out things she loved to eat and talking with storeowners about the freshest and most interesting ingredients they had in stock. She came home with a grocery bag of Bourbon-aged maple syrup, toasted pecans, and Guajillo peppers.

She let the ingredients sit overnight in BCBS and then presented her recipe the next day. Upon first sip, she says her instructor gave her “a look.” And that look meant that Rodriguez just created the winning recipe for this year’s Prop. It also meant a new career as a brewer at Goose Island.

This is a fantastic beer to pair with any dessert. The Guajillo peppers aren’t hot, but impart a rich dried dark fruit flavor that marries well with the nuttiness from the pecans and, of course, the fantastic maple syrup. Those in Chicago who are lucky to get their hands on are sure to love it!

Big thanks to the public relations team from Goose Island. The tasting event was fantastic and it was great to speak with the brewers about this year’s lineup. Cheers to another fantastic year!