We are thrilled to announce that Jack’s Abby will soon start distributing both keg and package in New York City. Launch events are currently being set up for Mid-April at the best beer bars in the city. We’ll keep you posted on the wheres and whens!

Jack’s Abby is in Framingham, MA. About 30 minutes east of Boston, (and 3.5 hours drive from NYC) it was formed by three brothers in January 2011. They focus on lagers,and they’ve perfected it.

We’re not yet sure which specific beers will be available in the city, but so far,we’ve tasted the following:

Jabby Brau– an American Pale Lager. Not much hops, but yeasty and malty. It’s actually very malty, but since it’s light and bubbly, coupled with the low ABV at 4.5%, it’s also very drinkable. A total ‘session lager’. This beer would go well as a light drink during dinner.

Kiwi Rising– a Double India Pale Lager. First comes the dough flavor from the malt, then fruity citrus and grass from the hops. The hops are Kiwi Hops from New Zealand, which give it flavors of lime, passion fruit, and orange…an overall citrusy kick. For Americans used to hops from the Pacific Northwest, this beer is a great change of pace, and will really open your eyes. 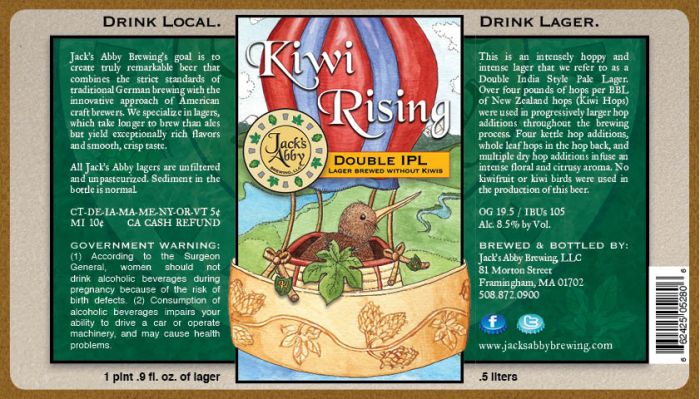 Lashes Lager– a Hopbock Lager. Bocks are usually not hoppy at all, and this one didn’t have the extreme hops like the IPAs we love, but it had just enough. The bit of hops combined perfectly with the strong caramel and bready malt flavors. The flavor and the low carbonation (typical of bocks) made it really easy to drink.

Smoke & Dagger– a Rauchbier (smoked beer). A German style, rauchbier beer is made by drying malt over an open flame, then brewing beer with this malt. Jack’s Abby used beechwood smoked malt, giving the beer a smoky, almost bacon-ey flavor. Fortuntely, it wasn’t overwhelmingly smoky, which let the other flavors come through. It smelled like a fireplace and bacon bits, and tasted like caramel, chocolate, and coffee.

Hoponius Union– An India Pale Lager. Very citrusy with a mild bitterness. It doesn’t knock you over the head with a depth of flavor like Kiwi does (it’s not a Double IPL like Kiwi), but is a really good, easy-to-drink IPA-like beer. When you think of a lager, it’s usually a heavier, maltier beer, but this is very light and much more focused on hops.