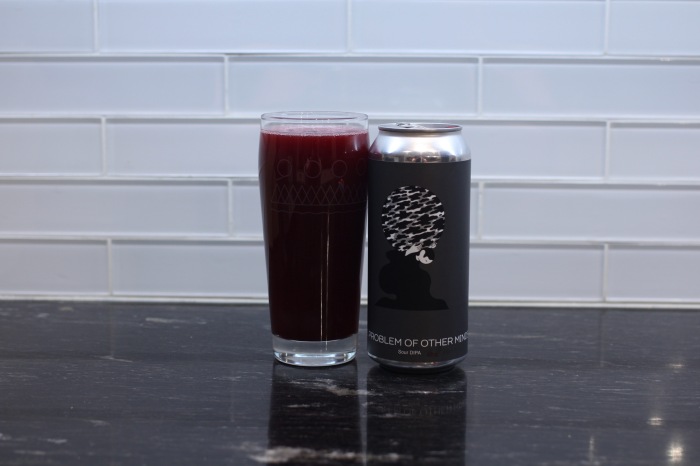 Last Saturday, Hudson Valley Brewery (HVB) held a can release at As Is NYC, in Hell’s Kitchen. The Problem of Other Minds—a sour IPA with wheat and malted oats, milk sugar, black currant puree, vanilla beans, and hopped with Mosaic hops—was only sold at the bar (but not at the brewery’s taproom in Beacon, New York). It was a very rare and special treat for NYC fans to have the opportunity to snag these amazing, unique beers in the city, instead of having to resort to trades, or to have to travel by car or train to the brewery.

The 11 a.m. release coincided with an HVB tap takeover, which, unfortunately, I couldn’t attend, but a few friends who made it said it was a ton of fun with an amazing list of beers—that’s no surprise for a special event held at As Is, which consistently puts on some of the city’s most unique tap takeovers. I wish I could have been there, because I can’t imagine a better style of beer to indulge in for brunch—or to pair with the breakfast sandwiches served at the event—than HVB sour IPAs which are basically hybrids of beer, fruit smoothies, and brunch cocktails.

Even though I couldn’t make this awesome event, I’m so glad that I scored some of the  cans—because The Problem of Other Minds is absolutely amazing! I’m a huge HVB fan, and this one is certainly at the top of the list of the ones I’ve tried.

As soon as you pop the can, a strong aroma of vanilla bursts out. The beer pours a vicious stunning ruby red, with a pink head. The mouthfeel is thick and creamy. The first thing you taste is vanilla followed by the sweet fruit and a nice bite of acidity. I thought this was one of the more acidic sour IPAs I’ve had from HVB, but the acid is balanced very nicely with the sweetness of the currant puree and vanilla. In all, I think it tastes like a perfectly balanced adult vanilla yogurt fruit smoothie.

My only complaint is that I know it will probably be a long time until HVB blesses the city with another release. Please don’t keep us waiting too long! PRETTY PLEASE!