The newest Toppling Goliath drop in NY was the one everyone was waiting for . . . because it included King Sue! When I first heard that Sarene Craft Beer Distributors would start distributing here, I couldn’t wait to finally try this legendary Imperial IPA.

As an added bonus, we also received cans of another Imperial IPA—Fire, Skulls, & Money—which, in my opinion, is equally as amazing as King Sue. But perhaps the best part about this drop was how incredibly fresh these cans were. Each were only about a week old when they landed. 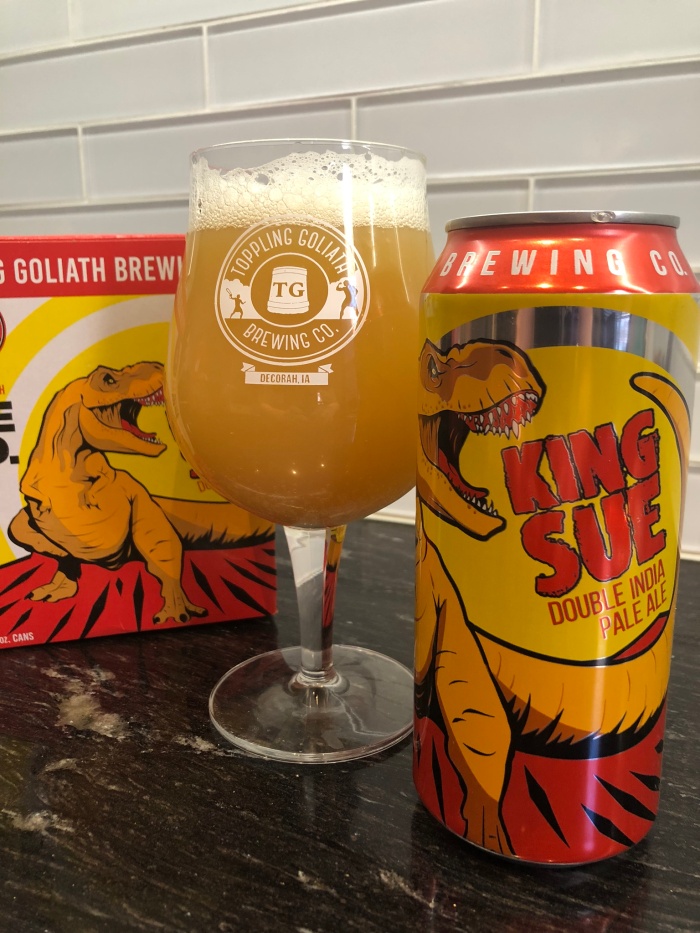 First off, this beer lives up to the hype. It’s 100% hopped with Citra hops. I’m a huge fan of Citra and this IPA is an unbridled celebration of this super citrusy, crisp hop profile. As soon as you crack the can,  grapefruit aromas rush out. The mouthfeel is creamy and smooth. As for the taste, you get huge pineapple, grapefruit, and citrus fruit and a mild bite at the end. Tropical fruit lingers on your palate. It’s just so refreshing that you can’t stop sipping and sipping and sipping . . .

Like I said earlier, I think this beer is just as good as King Sue. It’s hopped with three of my favorite hops: Citra, Mosaic, and Galaxy. The aroma is big peach and mango. The mouthfeel is silky and smooth. You get tons of tropical fruit and dankness with this one—orange, peach, mango, passion fruit, blueberries, and peach. I was so excited for King Sue and was also absolutely blown way by this one and will make sure to pick up  both again the next time they come around.